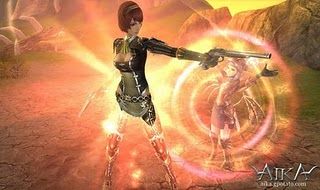 is an upcoming MMORPG from Gala Networks, and has already won the heart of players and press in Korea. The Western Closed Beta has begun, and we wanted to know more about Nation vs. Nation combat and Prans. Read on.

Can you introduce yourself and your role in Aika?

My name is Christina and I’m the Community Manager for Aika. I keep an eye on the forums, post news on the Aika website, and also work with people in the greater gaming community to get the word out about Aika.

What is Aika? Which features make it stand out from other MMOs?

Aika is an epic, medieval-themed MMORPG. Aika truly shines in its rich, community-centric gameplay and its ability to bring extremely large-scale warfare to players.

Aika was designed to redefine the “massively” in MMORPG. Players are introduced to the unique experience of participating in colossal 1000 vs. 1000 warfare. These battles aren’t supposed to be random PK-fests, though. To add structure to the PvP system and give players motivation to organize and battle, the world of Aika features a set of five nations to which all players can pledge allegiance. Each nation possesses its own distinct personality and is populated by potentially nationalistic warrior-citizens, which lays the groundwork for truly epic military clashes.

There’s also plenty for players who are less keen on PvP combat to explore, as well. Aika has a versatile and very accessible crafting system, a sweeping storyline based on over 1,000 quests, and, of course, the Pran, a fairy familiar who accompanies the player on adventures and into battle.

How many classes do we have in Aika?

There are six classes in Aika: the Warrior, the Paladin, the Rifleman, the Dual Gunner, the Warlock, and the Cleric. The first two fall into the “fighter” archetype, the next two are “scout,” and the final two are “spellcaster.” All of the classes are of the Human race.

The Pran is the player’s sidekick. Can you describe her importance, from her growth since a young fairy to a fully developed character?

The Pran begins to accompany your character starting very early in the game and has a relatively minor impact at first. As time goes on, she’ll ask you lots of questions to develop your partnership, as well as cast buffs to help you in a tough fight. You’ll even see her cheering for you during battle! If you treat your Pran well and make sure she sticks with you on your adventures, she’ll grow in power (and evolve into more grownup forms) and develop a distinct personality. Her buffs will also become more powerful, and can really make a difference in fighting monsters or other players. If you treat her poorly, though, her personality will reflect that, and she may be less inclined to help you out!

Is the Nation vs. Nation combat the highlight of Aika? Can you tell us a bit more about it?

In Aika there are great relics that can be discovered which, when placed in specially guarded locations called Temples, provide powerful status boosts to the citizens of the nations that possess them. Nation versus nation combat, which is generally subsumed under the title “Relic Wars,” centers on the ongoing fight to capture relics from the Temples of enemy nations and secure them back at home. Players from all nations can come together in massive battles spanning multiple regions as they fight for control of the relics. It’s quite a sight to see. In our first closed beta test, the nation of Alethius was particularly successful at capturing the relics of other nations, much to the chagrin of their enemies. The political and military leader of each nation, known as the Lord Marshal, can also choose to invite another nation into an alliance. Allied nations can help defend each other or work together to assault their enemies, adding a new political dimension to nation vs. nation warfare.

Would you compare the sieges aspect in Aika to any other MMO? Perhaps Dark Age of Camelot?

It’s hard to compare the Castle Siege to what occurs in other games, though players coming from other games may find some aspects of it familiar. World of Warcraft players, for example, might see some similarities between Castle Sieges and the assault on Wintergrasp Fortress; however, in the case of a Castle Siege, it’s not just a simple “offense versus defense” scenario. There is the potential for up to 5 guild alliances to compete for leadership of the nation at the same time, which can lead to some really interesting strategy. You’re not just fighting to take control of the castle from its current defender– you’re also trying to prevent other would-be usurpers from gaining the throne.

We are absolutely thrilled about Aika’s popularity overseas! In Korea, Aika won the Best of Show: Prime Minister Award, Player’s Choice: Best Online Game, and Best Game Design & Scenario at the 2009 Korean Game Awards, organized by the Korea Game Industry Agency (KoGIA) under the Ministry of Culture, Sports, and Tourism. We feel honored to have the opportunity to work on such an incredible game, and we’re excited to see what Aika can do in the West.

All in all, we’re incredibly happy with the results of the first closed beta test. We received an incredible amount of feedback from our players in the form of suggestions, criticisms, and accolades, as well as the usual collection of bug reports. Our second closed beta test was announced this past Monday and dropped like a bombshell among all of the passionate players who were eagerly anticipating its announcement. We’ve spent a great deal of time since the end of CB1 processing all the information we received in order to make improvements and build on our successes in hopes that we can provide an even better experience for our players going forward.

FreeMMOGamer: When do you expect to start the Open Beta?

We unfortunately can’t give you a date for Open Beta right now, but rest assured it’s not very far away!