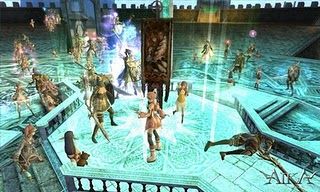 Gala-Net, Inc., a leading free-to-play online game publisher, has announced today the release date of its Open Beta (OB) for Aika Online . The OB will begin March 16th, and will allow players to explore all six classes, a full range of player vs. player (PvP) combat, all content from levels 1 through 50, and a complex player-run political system featuring a never-ending war between five competing nations. Media previews of the Closed Beta (CB) report that Aika is “a game that will demand your attention,” and “has many of us going back for seconds and thirds.”

New and returning Aika fans will be able to access a regular lineup of the exciting PvP events introduced during CB. Invading nations continuously attempt to steal valuable relics from their rivals in 1000 vs. 1000 battles, while weekly Castle Sieges pit guild against guild in a bloody struggle for political dominance. A diverse range of class-specific riding mounts will be accessible to players starting from level 40, from the Warrior’s war hamster to the Dual Gunner’s hoverbike. Players will also be able to benefit from an expanded Arcan economy by buying and selling rare items across all five nations through the auction house.

For those players looking for a challenging single player adventure, Massively.com notes that Aika’s rich, in-depth lore, over 1,000 player vs. environment (PvE) quests, hundreds of unique monsters to encounter, and expansive world “give PvEers plenty to do.” Aika Online sets a new standard for quality, scale, and depth of experience in the free-to-play MMO genre, leaving players eager to unleash its potential. MMOHub declares that “the politics and lore behind Aika and how they will affect game play is yet to be fully seen and [we] can’t wait to see it, as it seems it can only get better from here.”