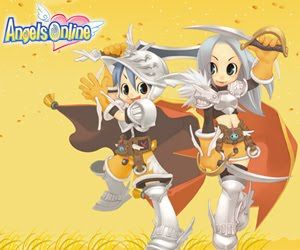 The Floating Island, a fantastical flying paradise, is the brand new addition to the world of Angels Online. It will bring awesome new scenes, brand new classes, abundant new content, fiercer quests and challenges for little Angels in the very near future. So now the Angels Online team from IGG are very proud to give you a sneak peak at the Sunshine Palace, one of the brand new scenes from the Floating Island.

Light your torch and rush into the dark

Archaeologists in Eden discovered a mysterious lair in the middle of the continent. It is said that a gorgeous palace hides deep in its depths holding abundant treasures that are guarded by an ancient dragon. Legions of monsters have been sent out by the Evil Lyceum to gather around the den. This is where the story and the adventure begin….

Players have no choice but to pass through 4 different environments including the den entrance, the wet den, the garden and the palace if they want to arrive at their final destination…Located in the middle of Eden, the den entrance is connected with the Deity Palace Ruins. Players can enter the Dragon Field from the entrance in the Deity Palace Ruins and then begin their new adventure.

-Dragon Field
Players can enter the mysterious den in the desert by passing through the entrance in the Deity Palace Ruins. It is said that the breath of an ancient dragon fills this abysmal den. An artificially created river flows through the entire length of it. Deathless dragon guards, rotten corpses and evil monsters are all waiting to attack the unwary.

-Hermit Wetland
When players go deeper into the den they will find that the buildings are more and more grandiose. Legions of monsters gather around them. They are the messengers of death. Players must keep their wits about them for these are no ordinary monsters! They are bestowed with new and unknown dark powers. The sluggishly trickling stream affords the dark den a small amount of life even attracting hermits who want to live in solitude. 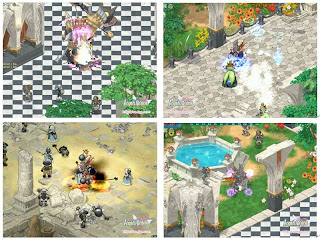 -Flower Corridor
Once players finally make it through the oppressive depths of the den the world will suddenly become bright again. The Flower Corridor is a land of idyllic beauty. Colorful flowers envelop the extravagant buildings and they have become home to some creatures that had become sick of the noisy world outside. They settled here a long time ago and claimed it for their own. They may look cute and lovely but they will defend their home jealously to the death. Players should never expect to be treated warmly like a guest here.

-Sunshine Palace
The holy Sunshine Palace has maintained its magnificent splendor even though several centuries have passed. The crystal clear river and the immaculate flower beds remind people of its past glory. A group of loyal palace guards still wander around the palace. In the very bowels of the palace, a throne cursed by a terrible magic power stands ion the way of all who wish to pass. But why? What are they trying to protect? Some unknown secrets or treasures? And where is the ancient dragon?

The Angels Online team will be releasing the new “Floating Island” addition in the very near future. An exciting adventure in the sky, brand new challenge quests, infamous ancient robot monsters, gorgeous spells and skills, awesome equipment and a mysterious new class… All of these are almost ready to give our little Angels an even more awesome game experience.