This Balkon’s Weapon 1.5.1 mod currently adds 18 new weapons to the game. Although the recipes show the iron version of the weapons, they can also be made with wood, stone, iron, diamond, and gold. They are:

Spear does less damage than a sword and has little kickback. However, the spear is a versatile weapon that can be either thrown or stabbed, both dealing the same amount of damage at Balkon’s Weapon 1.5.1 Mod

Halberd does more damage than a sword and has a large knockback.

Knife is very similar to a spear but uses less resources. It can also be crafted without using a crafting bench. It deals less damage than a sword and has roughly half the durability. The knockback from this weapon is almost non existant.

Battle Axe is a massive weapons that deals huge damage to both mobs and blocks. Its knockback is also much higher than most other weapons.

Warhammer deals the same damage and has the same knock back as the Halberd. However, it deals huge damage to blocks.

Javelins do more damage than arrows, but they are far less accurate and travel a shorter distance.

Musket is a powerful weapon with high accuracy. Too increase accuracy, crouch down while

shooting. The musket has a limited amount of shots before it will break. After shooting, it will take 2 seconds to reload the weapon. 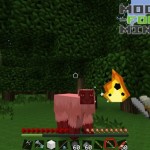