Battle of the Immortals 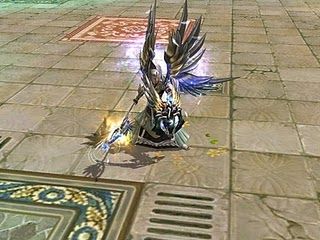 Battle of the Immortals is a 2.5D multiplayer game that incorporates eastern and western cultures ranging from Norse Mythology to the Qin Dynasty. Taking up the mantle of relic hunters, players can expect to travel throughout the world from the ancient tombs of past emperors in the East to the mythical Mount Olympus in the West. They will also be able to explore the Great Pyramids, uncover the mystery behind the Lost City of Atlantis and delve into lost temples deep within the Mayan jungle. Players will engage in epic battles against other players for the right to battle monsters, control cities & rule supreme.

– 5 Unique Classes – Each with their own distinct skill set and equipment
– Zodiac System – Empower your character according to their Zodiac symbol
– Auto-Navigation Quest System – Progress through quests easily with auto-navigation
– Soul Gear System – Unique sets of armor and gear specifically tailored toward each class that grows and changes as players use them
– Hardcore PvP – Battle other players to be the best within an in-depth ranking system
– Hardcore PvE – Compete against other players for the right to take down epic bosses
– PvE Time Trials – Race against other players to gain access to even greater challenges
– Pet System – Collect a wide variety of pets ranging from cute to devastating monsters
– Mount System – Ride upon giant beasts to shorten your travels and engage in combat
– Territory War System – Battle other guilds for rare relics, resources and other treasures