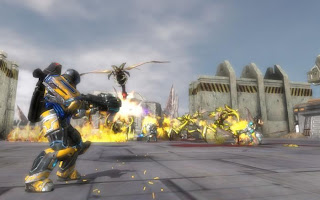 “We are thrilled with the positive response we have received from the 15,000 players in our initial closed beta. The anticipation we have seen online is gratifying and we are pleased that they enjoy the game as much as we do,” said Michael A. Williams, CEO of Reality Gap, Inc.
Players in Battleswarm choose between team-based, first-person action and acting as the supreme commander of hundreds of alien bugs. Shooters must confront swarms of alien opponents, but unlike most FPS games, they are playing against aliens managed by a human intelligence looking to outwit and outmaneuver them.

Up to six players can take control of soldiers in team-based, first- or third-person shooter mode, arming themselves from a huge arsenal of high-tech weapons and armor. They compete in discrete missions versus up to four Alien Commanders, who control hundreds of bug-like units in real-time strategy mode. The Alien Commanders must build hives, breed units, and manage their forces in missions to overwhelm the human opponents. Players can create guilds, buy and sell items, and level up their characters.