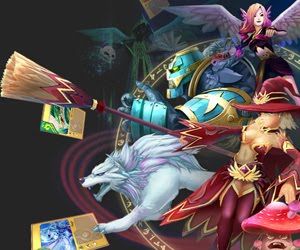 Camon Hero is the latest multi-control MMORPG which focuses on strategy and micromanagement as players lead their army of summons into battle. The game, set to launch this spring, uses a unique card system that allows players to create their own unique play style. With over 12 trillion unique summon hand combinations, players will always have new strategies to try. Players can also enter into PVP battles, try on various costumes and hats, and engage in a countless number of
exciting events. But, the fun does not stop there! Players can explore the dangerous new world as they hunt for companions to aide them as they battle to save the land from darkness!

“Camon Hero manages to blend the best elements of Trading Card Games with MMORPGs giving players a unique gameplay experience in an MMORPG,” said JK Kim, CEO of Uforia. “We are eager to open the game up to players during the closed beta and look forward to their insightful feedback.”

In celebration of the closed beta test, Uforia will offer several events up for players. The first will be a leveling event where players who reach level 25 during the Beta Test will be given the Private Store Guard Card (30days), an item that will offered in the item mall at launch.

The “Search for Incorrect Spelling and Grammar Event” challenges players to help find any errors in the game and the top 3 players who submit the most spelling and grammar corrections for the game client first, will win a large amount of Meso (in game currency) that they can use at launch.

The “Keep Your Name” event will give players who reach at least level 12 the opportunity to keep their chosen character names at launch, while the “Survey Event” gives players who participate in the Closed Beta survey, a chance to win a Special Wing Item which will be awarded in open beta.

Finally, the “GM Guerrilla Events” will take place during the closed beta test. The GMs will make a number of special events to be announced throughout the Beta Test with some great in-game items as prizes! Events can include anything from games of Special Monster Summon, Hide and Seek to random Pop Quizzes, with special gifts handed out to the lucky winners!