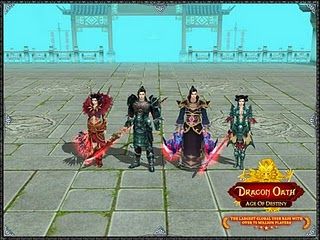 Kevin has been one of the 36 lucky players who have been chosen by the ChangYou team to enter Dragon Oath s upcoming expansion Age of Destiny before the official launch, earlier than anyone else. He brings us this in-depth preview. Check out what he thinks of Age of Destiny!

I played the new Dragon Oath expansion and it seems pretty chill. They really added a lot of content this time around which was surprising, I was constantly busy with all of the new quests and events going on. The best things about the new expansion, in my opinion are the Artifact Weapons. It feels awesome to have an immensely powerful weapon that looks cool at the same time. It’s also nice that they added multiple ways to get those weapons, so that it doesn’t boil down to a dogpile of people trying to do the same quests.

The Yan Tomb instance is really challenging, but really rewarding at the same time. It’s like 9 levels deep with tons and TONS of enemies to mow through on your way to the final boss. In addition to those enemies, there’s a mini boss on each stage that blocks you from getting to the next level. Fighting King Yan himself is a grueling task that really requires you to be on your toes the entire fight. Not to mention the fact that your group has to be well equipped to deal with such a powerful boss. All in all, it was one of the best dungeons that I’ve ever played through in ANY game.

I spent a little time in that Ice Space zone and I think it’s a really cool idea that should be implemented into more games. It’s just a mellow zone where you can go to collect experience. Sometimes players want to get their consistent experience, but relax a bit at the same time. This was made for those people (myself included) and I definitely approve. The amount of money that you have to pay to get in is pretty fair too (I think it’s like 3 Gold), so you don’t really get robbed of your funds too badly.

I’ve always been a bit fan of PVP, so I decided to do the Arena Chest event one day and it turned out to be a lot of fun. All I had to do was group up with a few people and then we hopped right into the PVP zone. Once inside, I was shocked at how quickly I was thrown into an all out fight for my life. Tons of people were fighting it out for the huge treasure chest in the Arena and it eventually became a scramble to see who could stand next to the chest and defend it the longest. Honestly, doing that event was a breath of fresh air for a PVP enthusiast such as myself. Far too often, people are put in PVP situations where they’re expected to just mindlessly fight it out over nothing. It’s cool to finally see an objective that isn’t just “kill those guys”.

The coolest quest that I took part in was the Swallow’s Dock series. When I hopped into this quest I felt like I was taking part in an epic movie battle. Hopping from boat to boat in a race to protect a high ranking military soldier, scrambling to intercept bandits while fortifying defense structures, fighting off warlords with devastating magic attacks, this quest has it ALL. Even though the quest itself is challenging to complete, you never stop having fun, which is what makes it awesome in my opinion.

Overall, this new Dragon Oath content is gonna make a lot of players very happy. I think that these new editions are definitely something that will keep the veteran players engaged and bring in a lot of new players at the same time. It’s been quite awhile since I’ve spent a long time on a F2P MMO, but I’m having such a good time with Dragon oath that I really don’t even notice how quickly time is flying by. I encourage everyone to try this stuff out, it’s definitely worth it.