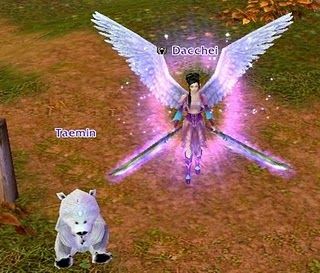 Dacchei, a 19-year-old college student, brings us this in-depth look into the popular martial arts fantasy F2P MMORPG Dragon Oath . Check out why thousands of female gamers are addicted to this game!

Being an avid gamer, I’ve played many, many free MMORPGs. Recently it’s been easier for me to jump from game to game, seeing basically the same content everywhere I went. But then I ran into a game that actually caught my eye and made me unable to quit playing it.

The first feature that caught my eye about Dragon Oath was its nine classes. These include classes that are commonly known in many games such as Taoist and Assassin, but then there were some classes I had never heard of before like Lotus Order and Pyromancer. Then, the next feature that I was attracted to was the Pet System. The Pet system on this game offered many different types of pets and also allowed pets to be much more than just an attractive sidekick. With pets, players are able to have another body to tank for them, attack with them or even heal them. Finally, the most unique feature of this game (for me) was the 24/7 events. Many of the events are called Intruders and Thieves. In these events you join a party and fight on an instance map for experience and items. These monsters give much more experience than the normal ones, and the events are quite enjoyable to do (in my opinion) because of the interaction with other players.

Recently Dragon Oath released its Christmas Events, much to everyone’s excitement. Some of the main items that people were looking forward to included the new level cap, new map, and new Christmas items. After logging in on the 17th, I was very impressed with the changes to Luo Yang. The snow made the game seem much more festive. Then I ran to see the new map, Silver Snowfield, that had just been opened to the public. This map was much like the other caves I had been to, however it was unique because it offered the new Penguin pet. Also, this map offered a new drop called ‘Monster Diary’ that would allow players to get their much sought after 2nd Class Fashion after collecting 20 diaries. After I was done exploring the new map and ringing the ‘Bell of Happiness’ (another new feature promoted by the mallet drops), I decided to check out the Token Shop. I have to say, I was incredibly impressed by the look of everything in the shop. All the new mounts and fashions looked amazing. However, what didn’t impress me were the prices. Being a broke college student, I knew I wouldn’t be able to buy anything in the shop. Still, one can’t help but hope that these items might be up for grabs one day as event prizes. J Some other disappointments that came along with this update were the low drop rates of a lot of the items, the level requirements for most of the activities were biased toward higher levels, and there were not enough new stuff/areas. Even though I enjoyed spending some time at snow field, within a few hours, I was back to my routine of doing rebels and thieves every hour. Also, it was odd that the only city to get a new wintery look was Luo Yang. Regardless though, the update did help bring a new “Christmassy” feel to the game and provide the first step into parts of Dragon Oath that have yet been added into the game.

Ultimately, Dragon Oath still has much more growing to do, but then again it also has a lot more content that has not been released in the US version yet. The community gradually increases every day, yet it’s still small enough to easily make friends with people from partying with them over and over again. In my opinion, it’s a good size because there are always more people to meet, yet after playing for a while you begin to recognize other people’s names. If you haven’t tried playing Dragon Oath yet, I highly recommend it. It offers enjoyable game play with tons of things to keep you busy, including raising pets, improving your life skills (crafting, mining, planting, fishing, etc.), and PvP events. PvP is a huge part of Dragon Oath and should inspire people to level faster or work harder on getting their equipment stronger. All the maps allow PvP, though some not without penalty. There are certain maps that do allow PvP without penalties, and there are also events, such as the Class Martial Battle, that allow you to test your strength against others. In the end, no matter how you decide to play your character, I believe that as long as you do what you enjoy doing, you will find this game to be an enjoyable way to spend your free time!