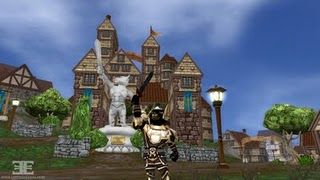 The time of Man has passed. The great achievements of humankind have been lost to antiquity or reclaimed by Mother Earth, leaving fresh ground for the ancient Beasts from which Man descended to return to Earth and contend with Demons, Faeries, Dragons, Gods, and Titans of old to write their destinies anew.

Set in a high-fantasy universe that combines real-world history, legend, and myth with original creations, Earth Eternal will provide a quality experience without the burden of a mandatory subscription. Players will be able to play for free, paying only when they feel the game is worth it.

Play itself is classic in the best sense of the word, revolving around completing quests, overcoming challenges, battling monsters and other players, and becoming both powerful and wealthy.