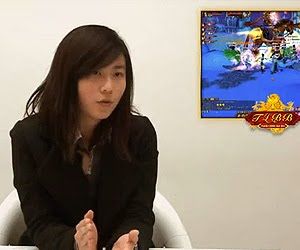 ChangYou EU recently received a number of requests from players asking for a more in-depth analysis of TLBB from its original source, China.

The company is happy to announce that they were able to pull the Product Manager, Nicole Bai, away from her busy schedule in the Development Team to discuss the key features, plans and growth of TLBB.

Widely known as one of China biggest ever MMO’s, TLBB has come alive in Europe with an ever-growing fan base and user number. As figures have risen, so too has the positive response from players that has enabled ChangYou EU to feed it back to the egg heads over in China’s HQ for further research into the game.

European Marketing Director Mirko Gozzo reveals “this video interview comes at a time when players have been voicing their curious opinions about the game. We’re now able to respond to these requests and there’s no better person to answer them than Nicole. She’s done a fantastic job in China both with the game and the team so it’s a real privilege to have her thoughts on issues such as future plans and the development of TLBB”.

The company has been taking the ‘acoustic’ approach of listening to what players have to say and what they think about TLBB in order to make the necessary changes that will further enhance the gaming experience.