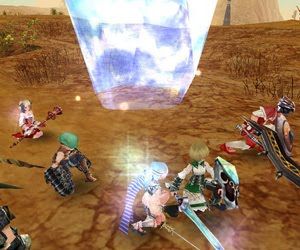 Fantasy Earth Zero, licensed by SQUARE ENIX Co., Ltd., features three distinct classes to choose from, five unique kingdoms vying for a player’s allegiance, immersive quests, a stunning soundtrack by Hitoshi Sakimoto (FINAL FANTASY TACTICS®, FINAL FANTASY® XII), the pulse-pounding excitement of 50 vs. 50 PvP and a nearly endless array of character customization options. In Fantasy Earth Zero, an era of peace ironically brings about war, which causes trivial disputes of the past to evolve into full-blown battles, throwing the world of Melpharia into chaos. Kingdoms are created and destroyed over the years while their inhabitants fight for control of powerful crystals spread throughout the land. These crystals are the origins of everything in the world and their power can be used for transformations, healing, and more, making them invaluable.

Fantasy Earth Zero (FEZ) is a massively multi-player online role-playing game (MMORPG) from Square Enix Co., Ltd., the creators of Final Fantasy® and Dragon Quest®, two of the world’s most well-respected video game franchises in history, as a subscription based game. After being converted to a free to play game, FEZ is now on its way to the US.
Fantasy Earth Zero boasts a vast game world that puts epic warfare directly in the hands of the players, emphasizing bristling battle systems, loyalty to friends and defending the player’s country against all threats. FEZ combines fast-paced action and RPG elements in a player vs. player vs. environment (PvPvE) world.
Paylas