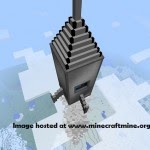 For Galacticraft or Spaceship crafting Recipes you must go to here

Minecraft Forge should be extracted into the server jar first, then Player API should be installed after Forge. Run server and stop, Galacticraft .zip file should be placed in the “mods” folder in your server directory.