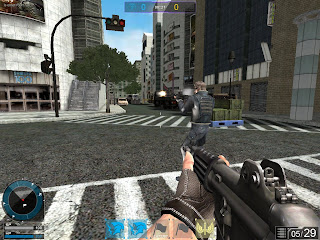 Operation 7 is an online shooting game (MMOFPS) featuring a unique gun modification system.
In Operation 7, 5 types of different items including functional items can be equipped on the character. Also, there are 3 different designs for the same model or parts so each player can costomize their character appearance the way they want.
In addition, players’ body movements while shooting, such as dashing or holding breath, will also influence destruction and accuracy.

Operation7 has its focus on modern day combat. So expect to go into battle with the usual suspects: AK-47s, M4s, MP5s, M16, AUG, MAC10, K2 are just some of them. Players have a chance to experience authentic weapons which current soldiers in the world are using. Another outstanding feature is the Lean Mode. It gives the player more flexibility in the way he shoots or walks. Gamers are able to hide behind objects and walls and shoot by leaning to the side to have more protection and cover. Once you get used to the Lean Mode, you do not want to miss it. The slogan of Operation7 “It could only take one shot. The one who aims first, kills first” shows you that this game focuses also on realism and its realistic target system. Also each map has its own character and style to play. In an open area map for example it’s recommended to aim and fire from a distance since it is nearly impossible to survive long enough to get into close combat. Operation7 also supports scope mode, dot sight mode and gun sight mode. These features definitely give the game more realistic feeling and dynamic game play than other FPS.

Operation7 has five game modes: Head Hunting, Death Match, Survival, Demolition, and Hold the Line. The Game rooms support up to 24 players which can vary by the selected game mode. The host has the possibility to manage game settings like game time, friendly fire and number of kills required for victory.

– Headhunting: A head for each team is chosen by turns. The team who kills the opposing team’s head wins.
– Death match: Win or loss is determined based on the total kills of each team.
– Survival: Game continues until every member of one team dies. The death of the team captain results in an immediate defeat
– Demolition: The teams must protect or blow up the designated areas.
– Hold the Line: The team must try to take over the neutral flag in each area or try to occupy more places than the enemy to win.