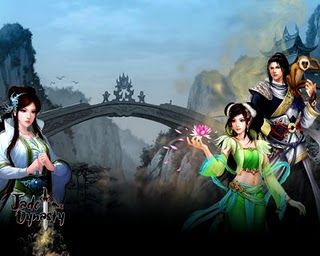 Perfect World Entertainment Inc., a wholly owned US subsidiary of Perfect World Co., Ltd. (NASDAQ: PWRD), today congratulated Jade Dynasty players on the server, Shura, for being the first to unlock the new PvP-oriented area, Ancient Lands. Gaining access to the Ancient Lands required a server-wide effort requiring players to complete a number of daily quests to unlock it. This is a huge accomplishment and to commemorate this milestone, Jade Dynasty players across all servers will now enjoy free double EXP for 24 hours every Thursday for the rest of February.

“We wanted to give recognition to the Jade Dynasty players on the server, Shura, for this milestone accomplishment,” said Andrew Brown, Product Manager for Jade Dynasty. “It’s not every day that a new area is unlocked as a result of a player-wide push and the next chapter in the battle between the immortals and humans.”

As the battle rages on, the protective barrier around the Ancient Lands has begun to deteriorate as a result of the disruption in the universe’s balance. Originally built as a shrine to the Athan gods by the humans, it is rumored to be the origin of immortality. Once a tribute and symbol of the truce between the immortals and humans, the Ancient Lands now becomes next battle ground in the fight for immortality.

Which side will you choose? Will you seize immortality for yourself as a human? Or will you aid the immortals to restore the vital balance that has begun to tear the Ancient Lands apart?

To choose your side or for more information on Jade Dynasty, you can visit the official website at  http://jd.perfectworld.com/