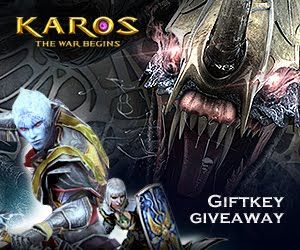 NHN have teamed up to give our users a key which will grant you in-game items for Karos Online. To get your key you just need to click on the link bellow “Get Yours!”.

Karos Online is a brand new free-to-play fantasy MMORPG developed by Galaxy Gate (lead developers of Laghaim and Last Chaos), to be published in Europe and North America by NHN Corporation. The English version is currently in open beta, with German and Turkish versions to follow in 2010. In Karos Online, players take the role of a hero determined to defeat the curse of darkness falling over the world of Asmara and ascend to ultimate glory by becoming the mythical Karos warrior. Through questing, guild clashes and mass PvP, they enter the fight for domination over the world’s vital energy source, Fletta. Fletta provides the basis for the game’s unique and complex alternate progression system; alongside traditional leveling within the game, Fletta energy can be used to increase stats, give buffs, buy resources and enchant items.