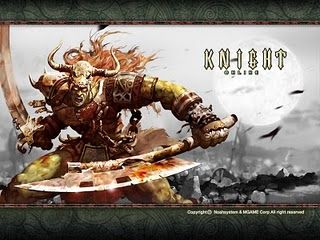 Knight Online World is a free-to-play fantasy MMORPG that has over 10 million players all over the world. So many people can’t be wrong, and we set to discover more about the game.

FreeMMOGamer: Can you introduce yourself and your role on Knight Online World?

My name is Joseph Willmon, and I’m the Producer for Knight Online World.

FreeMMOGamer: What is the story behind Knight Online World?

There’s actually a really deep backstory behind Knight Online World which, if you read it, the humans are actually kind of the bad guys. There’s this whole mythological bit where the nation of El Morad is beset by evil and only the Knights can restore balance and it looks like all will be lost. They confront the evil gods and triumph, of course, but it turns out during their gloriously epic battle they got a little too close to the evil gods they were battling, and end up tainted. When those Knights get older and have children, it turns out they’re even more mutated and evil looking! So now the progeny of all these famous Knights are looked down upon and treated like second class citizens, insulted, spat upon, and rounded-up and enslaved in the very kingdom their parents fought to protect. A good number of them eventually escape and found the nation of Karus, unleashing their pent up hatred to wage war against their former kinsmen, who they see as cruel and petty. It is this conflict around which the game is based, and one in which the current crop of gods often meddles.

FreeMMOGamer: Knight Online World is praised for its PvP capabilities. What do you think makes it so special?

It might not look it, but Knight Online has some truly compelling combat under the hood, going beyond the usual rock-paper-scissors mechanics you run into with other MMOs. Of course you’ve still got your skills, spells auto-attack, and everything that you’d expect, but where Knight Online really shines is how you choose to string those skills together to form custom combos. It’s actually more reminiscent of arcade-style fighting games like Street Fighter, but on a massive scale, since our battles usually consist of hundreds of players on either side. As a player you know dozens of different combos and you’re constantly trying to choose which one to execute given your situation and opponent, as well as monitoring your health and magic points with skills and potions, giving you a real sense of personalization and ownership over the strategy you adopt. This is all besides the facts that we have both the largest PvP battles around—comprised of literally hundreds of players on both sides—and meaningful PvP with consequences and rewards. As one example, if your clan manages to capture the castle in the bi-weekly Castle Siege War, you control access to a dungeon that drops some of the best loot in the game, and you gain income tax from all sales in your land. 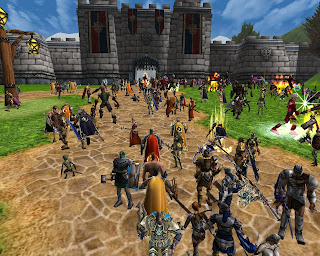 You’re telling us there’s 10 million players registered in Knight Online World! How do those numbers make you feel and what are your goals for the near future?

We think it’s awesome, of course, and it’s the players that really make the game as great as it is. Our players are incredibly passionate people who are deeply involved in both the game and community and who have an active interest in helping make things the best they can be. We’ve been gathering a lot contextual data recently about how Knight Online is played, and our near future goals are to take all of that and apply it in ways that make for a more quantifiable and engaging experience. New lands, strategic encounters, solo content, account upgrades, and stat tracking which can be displayed to other users.

Do you think Knight Online World would be nearly as successful were it based on a pay to play model? Is free to play the only future you foresee for MMOs?

I could talk all day about this, but I’ll try and keep it (relatively) short! As a gamer myself I’d hate to see a future comprised of only a single business model—after all, the very foundation upon which free2play games are built is giving the player more choice in how (or if) they pay. Still, the market seems to demand the enhanced services that free2play games provide and I believe that in time publishers will embrace this in greater numbers. MMOs generally require large time investments to have fun or be competitive. To some, that time is invaluable and they’re willing to pay whatever they can to circumvent the time required to make it to the top. To others money is more valuable than the time they might have to spend playing to get to the endgame. Free2play games simplify this equation by allowing every player to decide for him or herself where they place greater value, and act accordingly. I think the market will always have a place for subscription-based games, but I’m certain that the ratio of subscription vs. free2play games will soon tip in favor of the latter. Even in subscription games there is an active and thriving secondary economy based on character, item, and gold sales that oftentimes is worth far more than what the publishers make on subscriptions which shows there’s a definite demand there. To answer the original question, I think every MMO is designed from the ground up to cater to its payment model and Knight Online is no different. KOL is a highly social game, with gameplay based around groups, clans, raids, instances, and PvP all of which necessitates many interactions between large numbers of players. All players essentially act as content to each other, whether they pay or not. This has been a major contributor to our current success and what will keep the game going strong into the future. If it makes sense, we’re constantly trying to find new ways to make paying appealing (to keep the lights on) yet unnecessary (to keep everything fun and fair)! 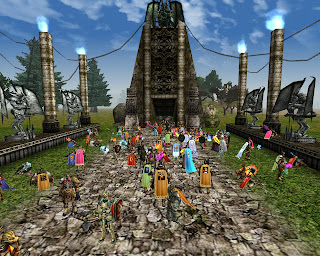 What are your thoughts on the Chaos Expansion? Any radical changes to the game?

The biggest thing the Chaos expansion does is take Knight Online’s killer PvP and make it accessible to everyone immediately, whether you’re a five year vet with a level 83 Battle Priest or you just downloaded the client today and are still trying to figure out what the heck a Puri Tuarek is. It’s like an arcade game within the game. The Chaos Battle opens four times daily, and when it does literally anyone and everyone can get into this all out FFA brawlfest that’s ridiculously fun and destructive. The best part is that even though you get assigned a pre-made character to fight with, the rewards you get for participating carry over to your actual character! There’s also this new mining system which is simple, yet absurdly engrossing. Essentially, you buy a pickaxe, you find some rock, and you mine. Every time you do you can either get experience, stones (which can be used to chuck at other players), or Mysterious Ore that can be refined into a random item! In addition, the Chaos expansion adds lots of other great stuff like deeper appearance customization, a redesigned UI, wearable wings, and of course any expansion worth its salt comes with new armor and weapons!

FreeMMOGamer: Besides this expansion, are you already planning the future for Knight Online World? Anything you would like to share with us?

Let’s just say there are a lot of ways players can compete in video games, not all of which involve bashing each other over the heads with swords. Future updates are planned to explore this idea more fully, examining concepts already familiar to players like cooperation, rivalries, and PvP, but in ways never before seen in an MMO. You’ll just have to watch and see!