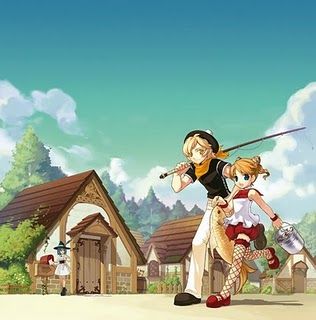 NEXON Europe the publisher behind popular online games MapleStory and Combat Arms, today announces the launch of their latest release for a brand new MMORPG, Mabinogi

Following its successful debut in North America, European players can now look forward to experiencing a brand new fantasy life for themselves. This free-to-play game based on Celtic and Welsh mythology embraces key MMO features and offers a robust, universe where people can experience all facets of fantasy life from fighting to farming. Along with content updates and exclusive events this enchanting game lets you experience another world as you embark on your journey through a magical land.

After completion of the recent closed beta test, fans and newbies alike can now enjoy the latest storyline edition to the game. The Generation 2: Paladin update brings new episodes, quests and unique Paladin skills. By becoming a Paladin, players can boost their character attributes once a day for a certain time period. Core Mabinogi fans and new players should keep an eye out for this content, as this is an update not to be missed!

To celebrate the open beta launch and content updates Mabinogi Europe is also announcing a number of exciting in-game events, allowing players to immerse themselves in this new found land. Starting from today users can look out for the Pet Adoption event, where exclusive virtual pets will be offered as rewards to players that complete a request from the NPC Duncan at Tirchonail. Following this an Attendance Reward event and screen shot contest will be launched and users can expect to receive prizes for their participation on both.

If that wasn’t enough to tempt you in then perhaps this is, as In February Mabinogi will also be setting the mood for love with a celebration of Valentine’s Day. Romance is definitely on the cards this month as players will be able to receive chocolates from NPC’s and also share these with one another. As well as this heartfelt gesture, players will also be invited to join the Boss-mob video competition where users can get involved by uploading videos of their character in a bid to win a prize.

And finally, players can maintain their character without reset or wipeout right through the open beta and continuing through the official launch – coming soon.