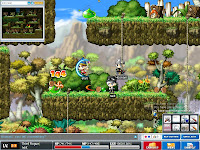 Who ever said that all MMORPG´s should be 3d, or even 2d overhead. MapleStory tried taking mmorpg’s to a new world by combining MMO with Platform.
MapleStory is a sidescrolling mmorpg, which honestly sounds a little far off at first but when you then get into this big world of little cute figures and japanese monsters, you actually get quite a hang of it.

MapleStory is first off about fighting monsters gaining lvls getting new skills and better items, But well what mmo isnt. The game is mostly grind oriented altho with allot of twists. In this game you don’t go out and do quests to get experience to lvl up, no you do it to get items. In fact this game is allot about equipment. Its one of those games where you plan out most of your way thru the levels before you even start creating the character, but don’t get me wrong its rather fun to do it. For each levels theres allot of items for each class, each serving a different purpose that matches a certain build. Then you can improve them by crafting special editions of the weapons or applying magic scrolls to enhance they’re ability’s, this adds some more depth to the game as well as adding quite a little marketplace on each server. Because you see in MapleStory you don’t go to vendors if you need equipment. You go to a big market where every stall has another player inside selling you items. 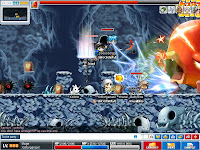 MapleStory also have quite a good selection of party oriented events. Where you can gather up you’re guild mates friends or whatever and get into a mini game where you fight thru stages, jumping obstacle courses or even fighting giant dragons. This is incredibly fun and should definitely be tried. Altho it is rather disappointing that there can only be one party inside each one on each channel of the server, this gives allot of waiting time and can be quite tiring.

The game do as pretty much all Free games do these days have a cash shop. This cash shop is a little different from what you see in allot of games tho.
In MapleStory cash shop is all about dressing up with fancy clothes and impress youre buddys, and have quite a neat selection in there. I even gotta admit i bought something once or twice while playing it. Of course there is a couple of game modifiers in there such as 2x Exp in a certain period, and getting pets that will loot for you.

Graphically the game is actually astonishing good. Even tho its a 800×600 2d setup, the sprites are very detailed. you quickly find out that just because its 2d it dosnt mean you cant get sucked into the world. And besides looking good, this low resolution makes this game playable on basically all computers.
And the whole sidescrolling thing really has a good feel to the game. It kinda makes the game more interactive and action based. 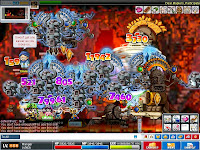 The sound in MapleStory is pretty good. Each city and area zone has a different soundtrack looping which aren’t half bad, oh well of course it might get a bit old when you played it for a long time, but hey what doesn’t. The sounds from skills characters are very well done and gives a good flow to the game.

Technology wise the games engine is very well written. Its incredibly rare to actually encounter a bug in this game, and if you do its most likely harmless Also it handles well with stress and can easily take a ton of people on the screen at the time without having any problems whatsoever. Altho it isnt as bad as it was back in the days, the game do encounter some hackers which makes life hard for others. But they re starting to appear more rarely as time goes.