Elemental Cows Mod adds 4 new cows that have the power of the elements. Each one is extremely quick and has it’s own special abilities and drops. 2 of them also have powerful finishing moves you need to watch out for. Not only do these animals attack you, but they will fight any mob or animal as well! 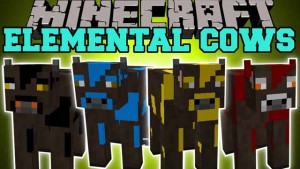 How to Install Elemental Cows Mod

Credit to Soulas for makes this Elemental Cows Mod