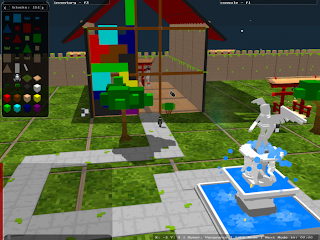 Neverdaunt is a dream like world of floating Islands and falling stars where nearly anything can happen. 8Bit refers to the era of computers with eight bit processors. N8 parodies the graphics style these computers were capable of and 8Bit also refers to N8 being a kind of Neverdaunt lite.
N8 is an online massively multiplayer virtual sandbox, A place to play, make friends, be creative and competitive.