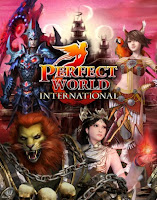 “We are excited to make our first appearance at the Electronic Entertainment Expo and for the opportunity to showcase several new titles that will continue to strengthen our growing portfolio of top-quality games,” said Dr. Alan Chen, CEO of Perfect World Entertainment Inc. “Our games have consistently raised the bar of what is expected of the free-to-play experience and our new product offerings are no exception. Our E3 lineup demonstrates our vision and capacity to produce high quality and innovative gaming experiences that appeal to a broad audience of gamers.”

TORCHLIGHT – From the creators of Diablo and Fate, Runic Games presents a fresh take on action RPGs with Torchlight. The discovery of a rich vein of powerful but dangerous magic ore has turned the sleepy village of Torchlight into a thriving boomtown. Players risk their lives to explore randomly arranged dungeons in a variety of treacherous and exciting settings, learning spectacular skills and finding the most exquisite and powerful treasures. Scheduled to launch as a single player game in late 2009, Torchlight will later continue as an MMORPG. A sneak preview will be available at E3.

JADE DYNASTY – The martial arts inspired MMORPG is the newest from Perfect World Beijing and makes its playable public debut at E3. Jade Dynasty features a unique martial arts game play style wrapped in a huge, evolving game world. As players begin their quest to uncover the secrets of immortality their choices between good and evil begin to shape their game play experience as they obtain different skills, items and a story that is unique to every player.

ETHER SAGA ONLINE – Based on one the four great classic novels of Chinese literature, Journey to the West, Ether Saga Online combines lavish graphics with an anime art style and a plethora of unique features and systems that make it truly one of a kind. A fresh new Integrated Quest and Navigation System allows players to seamlessly progress and locate friends effortlessly, while adventuring through the expansive world. Players capture and tame a large variety of pets, which help gain levels and access to new abilities for even greater customization.

PERFECT WORLD INTERNATIONAL – Perfect World International has more than 50 million players worldwide and is one of the most successful 3D MMORPGs to ever be released. Perfect World International boasts a level of artistic elegance unlike other games of its genre and offers an immersive online world that players enter free of charge. It features one of the most in-depth character creation interfaces in any game, numerous quests full of lore and depth, and an extensive selection of items and fashions.