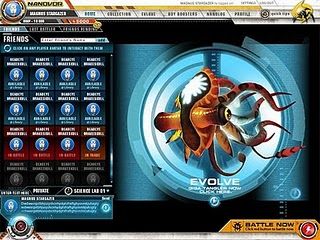 Nanovor is a futuristic game where players use tiny nanoscopic silicon monsters alled Nanovor that live inside computers to battle one another. Players start with several low tier nanovors, and must take part in battles to earn badges and new bots. Combat is turn-based with each character having its own set of skills and attacks. Players can collect, evolve and trade over 100 Nanovor. Join Lucas and his friends as they fight swarms of Nanovor against each other.

-FREE download includes everything you need to start playing, including up to 9 free Nanovor!
-Battle & Trade with your friends online!
-Evolve & Collect over 100 Nanovor – more are discovered almost every day!
-Build your collection with Booster Packs!
-Create Teams with combo attacks that your friends can’t beat!
-Watch stunning battles with 1000s of animations!