Have you ever wanted to make music in minecraft?  Even if you’re satisfied with the vanilla note blocks, this mod even improves those.  You now have a tool-tip which tells you what note the block is on, and you can set which note with a GUI. 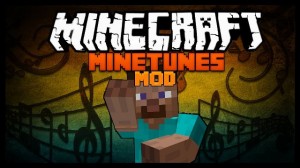 If you place a sign on a note block, you can put lyrics to it, which will pop up in the chat box.  But, this mod does way more than just that.

MineTunes also adds something called Block Tunes, which allows you to turn vanilla blocks into notes of their own.  Make a musical floor by placing blocks inside of a rectangle made of a jukebox and three note blocks with a lever on the jukebox.  The Block Tunes function also varies by time and biome.

The last function of this mod is the most complicated.  It’s called Sign Tunes.  You actually write music onto signs and it’ll play it.  It uses something called Music Strings, a full music language, to do this.  Using this you can change note length, octave, pitch, tempo, and anything else related to music.  You could put Beethoven’s 9th on here with (relative) ease if you really wanted to.

On top of that, there’s no reason at all to not have this mod.  It’s one of those mods that’re so small, but so useful, you forget they’re mods.  It’ll feel just like the vanilla game, really.

How to use the MineTunes Mod for Minecraft 1.6.2

How to Install the MineTunes Mod for Minecraft 1.6.2