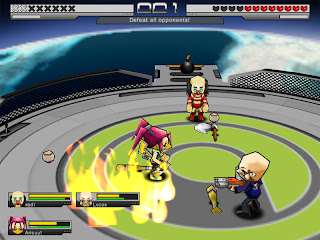 Splash Fighters is a 3d fighting action MMO with cartoony graphics. Chose from 8 classes and dozens of maps and battle it out alone or against other players. Splash Fighters has very basic controls but plenty of game modes, items, and game modes. SplashFighters is a fast-paced, online casual action fighting game where players battle it out in high-octane, martial arts fashion. Learn to fight in the Peaceful Death Dojo before taking your skills online against other fighters in the world to move up in the ranks to be the best! Utilizing hand to hand combat, weapons, and even superhuman psychic abilities, SplashFighters is an anything goes fighting game that is easy enough for anyone to learn, but takes skill to master
Status: Open Beta
Official Site: http://www.splashfighters.com (US) or http://www.getamped.org/ (Global)