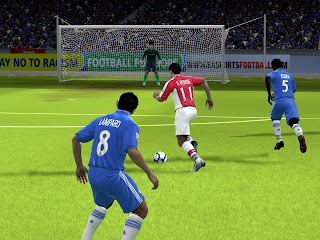 FIFA Online, the first downloadable FIFA football game designed for PC, is available to football fans everywhere around the world to play for free. Compete in the 2010 FIFA World Cup South Africa tournament mode and score the goal that lifts your nation to FIFA World Cup glory. Compete by yourself or online with friends in an authentic re-creation or a fantasy version of the 2010 FIFA World Cup tournament. EA SPORTS has also partnered with FIFA.com to give their Club members exclusive content. Any gamers and football fans who register at FIFA.com will receive an exclusive unlimited match pass to the 2010 FIFA World Cup South Africa mode. FIFA Online features 28 licensed leagues, 500 clubs and more than 15,000 players in a League Mode that enables fans to manage and compete as their favorite football club, and the ability to play online in challenge or cooperative matches. FIFA Online will enable football fans to build their favorite club into their fantasy team by developing or acquiring players, upgrading skills, and getting unique apparel by earning in-game currency to acquire items or through micro-transactions.
Status: Final
Official Site: http://fifa-online.easports.com