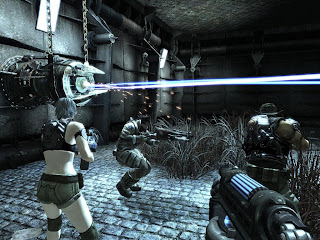 Huxley: The Dystopia is a powerful combination of massively multi-player online (MMO) game character development elements and the twitch-based fast-action game play of an Unreal Engine 3-based first person shooter (FPS). Players are thrust into a dynamic world of crisp graphics and realistic environments, where they align themselves with one of two races, Sapiens or Alternatives, in the battle to harness dwindling resources in a war-torn land. Game play is endlessly peppered with attacks from and against the Hybrid, a mysterious third group born of the two races.
Status: Closed Beta
Official Site: http://huxley.ijji.com
Paylas