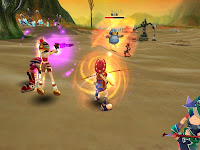 Gamescampus offers only a few games in their repertoire, none of which seem worth playing. Include one of their masterpieces in the list: an MMORPG targeting a more casual and perhaps a younger audience, the quirky-titled Asda Story.

Asda Story spotlights social interaction as the most important aspect of the game. You might find the game’s “Soulmate system” similar to that of Dream of Mirror Online’, but Asda Story offers a different take on the intimate interaction. Upon further scrutiny, you’ll find Asda Story falling short of expectations on every other aspect, copying quite a few gameplay systems from World of Warcraft (with slight modifications of course) and leaning on the anime-deformed looks.

The Asda Story official website gives a basic background of the happenings in the game. The story is a clichéd good versus evil plot, where the big boss Nihil, and his right-hand Omnidecron emerged from within the world, hell bent on destroying everything it sees. Hence, the humans, and the two gods, Tillia and Lumper, are tasked to destroy this menace once and for all. 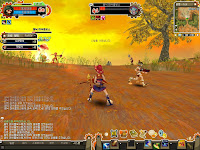 For what it’s worth, the website’s story has nothing to do with the game. The quests are totally unrelated, and the stories from NPCs are merely about their selfishness and laziness. You get your usual item-gathering, monster-killing, postal service quests. As you progress further, the quests lessen and you’re forced to grind your way to the next level just to unlock more quests. Monsters and quest givers are actually stingy when it comes to exp and rewards. The very basic party system can help you grind with your friends, although it is disappointing that the incentive in parties is a decrease in exp gains due to its shared division between members. In addition to that, acquiring quest items in a party is not evenly distributed, but instead, randomized. There is a high chance for anyone in the party to finish first, and leave the rest struggling to pick more quest items.

Asda Story has no WASD / arrow key movement, only point and click. As compensation, you can also click anywhere in the world map to automatically run to that location. It saves the effort of repeatedly clicking on the ground just to move. Moving around the world takes only quite a short time, due to the very limited number of maps and dungeons. Shortcut bars are on the lower portion of the screen, whenever you need to defend yourself from a mob of monsters. Sadly, there’s some response delay between the keystroke and the skill activation, regardless of cast time.

Skills are acquired by distributing skill points. You’ll find the skill tree almost similar to World of Warcraft’s talent tree, dividing the skills into three different specializations per class. To complement these skills, your equipment can help you boost your stats and skill effectivity through their Sowel system. Sowels are socketable jewels for your armors and weapon. These sowels are not permanently fused into your weapon, but instead, are readily interchangeable to suit your needs. 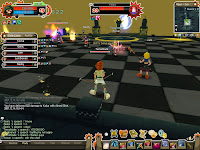 The game’s best highlight is the Soulmate system. Having a soulmate allows you access to new skills exclusive to couples, plus exp and stat-modifying bonuses if the couple is within range or in a party. Like the Sowel system, breaking up with a soulmate is also possible with the click of your mouse. The idea is pretty much a give-and-take situation, and proves to be very effective as you progress.

With all the mediocrity Asda Story offers, you’d think aesthetics may balance it out. Sadly, the environment is bland and uninspiring. Character models look like tubes with huge heads, and monster models are mere recycled models of the low-level variants. The music and sound effects feels like it came from an old console game too. Add the numerous bugs sprouting like mushrooms after every patch, plus the unintuitive gameplay, and you’ve got an MMORPG that’s best kept shelved.