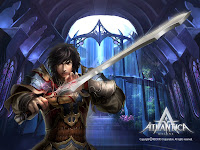 NDOORS Interactive, a leading developer and publisher of online games, today announced that Atlantica Online  has been selected as an official title at the Game & Game World Championship (GNGWC) 2009.

Celebrating its fourth year, GNGWC is a game competition that invites gamers from all over the world to compete against one another while playing an active role in promoting the booming Korean online games industry to overseas markets.

Selected as a GNGWC title for the second year in a row, Atlantica Online  features a revolutionary turn-based battle system that utilizes free PvP leagues and a new 100v100 tactical battle system for PvP combat. Atlantica has proven to be an ideal title for e-sports competitions with its unique PvP combat.

“It is a great honor to be selected by GNGWC for a second consecutive year and to be an integral part of the competitive gaming landscape in Korea,” said Peter Kang, CEO of NDOORS Interactive. “Atlantica has had tremendous success in many countries including Korea, Japan, and the U.S. and we are happy to partner with GNGWC to present Atlantica players the opportunity to meet in person and battle each other in a worldwide tournament.”

In addition to Atlantica’s inclusion in the GNGWC, NDOORS announced that aggressive expansion plans in Taiwan and Vietnam are currently underway. On April 3, NDOORS finalized a deal with VTC Games to publish Atlantica Online in Vietnam. On April 23, Gamania, Taiwan’s largest games publisher, launched its open beta.

“With the current expansion efforts in Taiwan and Vietnam and plans for China in the near future, Atlantica will truly become a global game,” added Mr. Kang. “Our goal is to offer an unmatched gaming experience to gamers all over the world. With our recent addition of the Titan Server and our strong expansion plans, players worldwide will be able to share the enjoyment of Atlantica.”

Recognized as one of the best free-to-play MMORPGs, Atlantica Online has received critical acclaim for its quality, accessibility, and entertainment value. The recently announced addition of the Titan Server enables interaction among players from all Atlantica servers, creating the first true test of who is the best of the best.