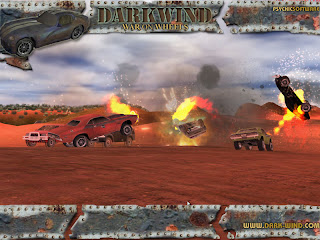 Darkwind is a simultaneous turn-based, 3D persistent-world multiplayer wargame set in the near future. The simultaneous turn-based gameplay blends the fast play of a real-time game with the strategic depth and variety of a turn- based game, and therefore appeals to both real-time and turn-based enthusiasts. The game is staged on a sparsely populated continent, one of the few surviving areas of civilisation. The focus of the game is on vehicular combat – cars with guns – both in the wilderness and in man-made arenas and racing circuits. Gameplay is split between a web interface (for strategic management) and a 3D interface which supports Windows and Mac OSX (for control of your characters and vehicles during a combat or race).
Official Site: http://www.dark-wind.com