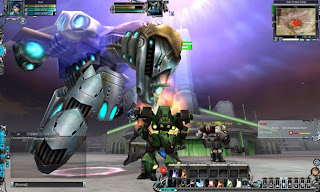 “Project of Planets”, is a 3D SCi-Fi MMORPG and MMOFPS, basically takes fierce battle between earthman and evil force from alien planet as motif with thousands of attractive and challenging quests. Besides the fascinating game image, different type of function such as Enhance, Compose and Plugin, First Personal Shooting is a major highlight of this game!

In Project of Planets all military powers have started to make more efforts to develop the application of nuclear combination technique and the hidden research on the mech on the basis of this technique. During that time, unknown cosmos-organism was discovered to approach the earth amid the nations’ escalating conflicts. These continual cosmos-organisms invaded into the atmosphere at last, which totally destroyed the ozonosphere and the earth surface. People could not live on earth any longer, so they had to move to underground base.

Fourteen years later the survivors reconvened United Nation conference and reached the agreement of resources share, so they were determined to return to the earth to fight back and take back the control of our mutual land.