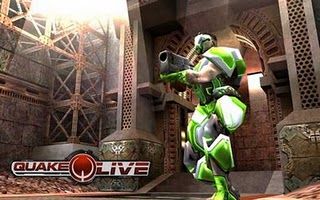 After creating a free account, Quake Live requires the installation of a simple plug-in. Once it has been installed, the game can be launched from most available web browsers. From there, the core game installs in the background while you’re given time to choose your character skin and tweak other settings such as controls, audio, and the color of your railgun beams.

Quake Live runs on a slightly updated version of the id Tech 3 engine, but the focus remains on usability rather than major graphical upgrades. Among other usability changes, Quake Live has a new, more streamlined HUD. The program is a modified version of Quake 3 Gold and executed as compiled code on the user’s processor, the user downloads the game in the background as a part of the registration process and interacts with the program either through a browser plugin that can be embedded on the webpage or as fullscreen. Updates to the game are continually released and automatically installed as the user logs in.

The gameplay of Quake Live consists of players attempting to frag more of their opponents than any other player or team in a given match. This is achieved by navigating a 3D environment while collecting health, armor, weapons, ammo and various power-ups in an effort to survive and to damage your opponent or opponents until their health reaches zero.