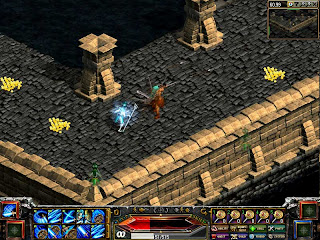 Red Stone, developed by L&K Logic Korea and released in 2004, has grown to be an extraordinarily successful title thanks to its classic graphics, involved storyline that develops throughout the game, unique character transformation system, high level cap (999 max level), and addictive Player vs. Environment and Player vs. Player action. With all those features combined, it has proven to be an exceptional game that’s hard to beat.
Red Stone is free to download and Free2Play. All players will have access to in-game items, public zones and levels! Special features, items, services, and the mysterious Fortune System are available through Premium purchases.

Red Stone is a unique story driven and fantasy based MMORPG. Set in the continent of Prandel, adventurers must search for and discover the truth of the mysterious Red Stone. Players can choose to battle others for glory in vicious Siege Wars and epic Guild versus Guild matches or focus their efforts on locating and discovering the remaining Red Stone fragments. Red Stone delivers a mind engaging experience as players must solve puzzles, outwit their opponents, and complete daunting tasks as they draw ever closer to discovering the truth.

Unlike most MMORPGs, there is no mechanic of “Mana” or “Magic Points” that are required to use special abilities in Red Stone. Instead, there is the Charge Point (CP) system, which is set up to ensure combat is always dynamic and interesting, and is a feature unique to Red Stone.

The CP system creates a very intriguing form of combat, and leads to a more immersive battle environment than that found in other MMORPG’s.

TF System
One of the most exciting game design features in Red Stone is the power to transform. This power gives adventurers fantastic gameplay options for each character class and opens up a world of strategy most MMORPGs lack.

Each of the eight character classes can transform, changing between sets of abilities and weapon options at any time. The squire with sword and shield can transform into a warrior and wield a two-handed sword. The peaceful tamer can communicate with creatures as beasts of burden or become the imposing summoner with the ability to control divine creatures of fantastic power. The archer can use her bow or switch into a lancer and fight with a pole-arm if enemies get too close. The healing priest can fight well with a mace and shield or transform into the powerful fallen angel, and the potent magician casting elemental magic can change into werewolf form against creatures resistant to magic but frail when assaulted with physical damage. Even more astonishing transformations are possible. The princess with her sling can turn into the little witch able to control light and sound as weapons, the necromancer with dominion over corpses can become the demon that wields fiery whips and the magic powers of Hell itself, and the trap-savvy thief able to detect danger and open locks can turn into the monk, whose bare hands are lethal weapons.

To find the missing pieces, seekers must use every skill they can bring into the perilous wilderness. The power to transform may very well be the advantage you need to discover what no one else can find: the Red Stone.

TF System Fortune
BoxesFortune Boxes are acquired via the Item Shop, and contain random items. Every Fortune Box contains at least one item, some of which can be quite rare and powerful. Beyond just the items themselves, though, if you are very lucky you will find that your Fortune Box contains a ticket. Tickets come in bronze, silver, and gold, and can be exchanged for even stronger item rewards. There are some truly amazing pieces of gear available via Fortune Boxes, so don’t miss out on this exciting way to strengthen your character.

The Red Stone team recognizes that players own the game, vowing to put Gamers First by utilizing official forums, emails, support tickets and in-game communication to provide the support players need – with a personal touch. By listening to what players want, the team will work to tailor the game according to their desires, making Red Stone an experience that will evolve over time. Best of all, the Game Masters of Red Stone frequently run live events to entertain and reward players for their dedication!
Red Stone was built around the idea of community, and rewards players who band together to take on great challenges. Outside of the game, the official forums provide a place for players to express themselves and discuss the world of Red Stone, as well as make friends and form powerful Guilds. With players logging on from all over the globe, the Red Stone community is diverse, vibrant and lots of fun!
Red Stone stands out with its unmatched character transformation system. Players will have access to two classes with each character, and can switch between them at a moment’s notice. Combine the transformation system with a fantastic storyline, thousands of items, huge zones, loads of monsters, and player vs. player fights, and you have the unique, fulfilling gaming experience that is Red Stone.