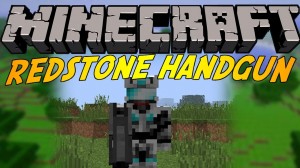 The RedStone Automatic Gun :
Fire’s RedStone at a decently fast rate towards you enemies. No charging requiered !

The Lapis Launcher:
Fire’s lapis at your enemies with a decent amount of speed, dealing a good amount of damage.
Every shot requieres charging.

The Zombie-Hord Gun:
Fire’s 5 rotten Flesh to hords of mobs, dealing medium damage. You will need to charge the gun with 5 rotten flesh before shooting. Maintain right click to charge faster. can be fired imediatly after charging.

The Ender Riffle.
Using enderpearls, shoot a netherstar towards your enemies with great power. The bullet will always continue flying right-on trough !

The Aran Gun
all heil Samus Aran ! A small tribute to Samus Aran, from the Metroid Prime game series, which can not be unseen if we are talking about guns that are worn over your arm !
The gun has explosive ammo, and uses gunpowder to be shot.

The Tawer
Using either Lava or Water, this weapon has changeable states and can shoot either fire or ice cubes.
Lava : Burn mobs, melt snow, melt ice into water
Water: Slow down mobs, place snow wherever it lands
The Thawer can overheat (even in ‘ice mode’ ..) , and you will have to wait untill the little counter reaches 0 before being able to use it again.

The GatlingGun
( || Dirt Spitter)
Is a gun that uses dirt and cobblestone as ammo, shooting about 64 blocks in less then 3 seconds !
The damage is low, but the speed of the ammo is totally worth it !!
The Gatling gun can overheat, and you will have to wait untill the little counter reaches 0 before being able to use it again.

The Type-25 Directed Energy Rifle
( || T25-DER || Plasma Rifle)
A gun crafted with a NetherStar ! It requieres no ammo to be shot, but has limited reach, and cooldown time. A tribute to all Halo fans, this gun is made after the T25-DER from halo, also known as the Covenant’s plasma Rifle.