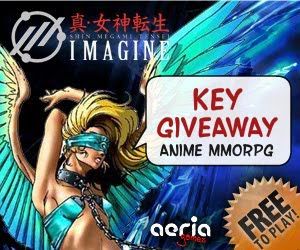 Aeria Games have teamed up to give our users a key which will grant you a package of in-game items for Shin Megami Tensei: Imagine Online. To get your key you just need to click on “Get my Gift!” below.

Shin Megami Tensei: Imagine Online is a free-to-play massively multiplayer online role-playing game (MMORPG) that has already been a huge success here in North America since its release 1 year ago by Aeria Games. Set in the expansive and storied Shin Megami Tensei Universe, which includes many popular titles such as Digital Devil Saga, Devil Summoner, and the Persona series; Imagine Online offers players a variety of innovative features, including: character customization and mastery which is free from any class system, involved storyline and quests all based in the Megaten universe, mounts, instanced PvP battlegrounds, and a Demon negotiation system which allows you to turn even your fiercest foe into a valuable ally! There are plenty of dungeons to explore, demons to catch, and an engaging story to unlock as you travel through our post apocalyptic world!