It is HD, include 128×128, 64×64 and 32×32, but at 32 x 32, you won’t be weeping too many tears because things look utterly alien. Instead you’ll be polishing the aforementioned monocle and having erudite discussions with cows. Life has never been so sweet. Credit to Glimmar for this wonderful 32×32 SteamPunk 1.5.2 Texture Pack HD. Big thank and credit to Glimmar as developer this awesome texture pack. 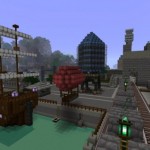