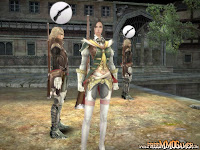 Sword of the New World: Granado Espada brings exciting original features to our loved and hated MMO game market without throwing away elements that will make you feel confortable and knowing where you will be stepping. Still, it’s not all roses…

Concerning the story, Grando Espada is set in a Barroque, renaissance set fantasy world in which a new continent has been discovered and this created a colonization rush on its lands. It’s easy to compare Granado Espada’s colonization with America’s one, even the fictional countries of Vespanola and Oporuto are strongly related to both Spain and Portugal. Then, you just have to add giant spiders, terrible monsters, heavy clothing and, believe me, some fan-service and you have Granado Espada’s general mood. Still, i have to state that I’m playing a beautiful game. Not just a beautiful game, but a game with a beautiful concept art. This is something important, since it doesn’t matters if the engine is good and the 3D models are gorgeous on your Directx 10 video board if, well, they are ugly to look at. Sure, beauty is a matter of taste, but the whole landscape and mostly all the clothing in the game draw a lot of attention to the care given to the details.

There is a surprising good effort on trying to immerse the player inside Granado Espada’s world, not that it is overall high, but it is high considering our general Korean MMO style. Yes, Granado Espada is Korean and it is made by Hanbitsoft. If you don’t like Korean heavy-grinding style, you may not like it at all. Still, the uniqueness of the setting is worth giving it a try. Getting back to the story, you play in a so far unmatched Multi Character Control that, allowing you to play with up to 3 characters at the same time, takes your family of pioneers around the world exploring, killing and getting more powerful in order to…well, Granado Espada isn’t a game with a higher goal. It makes you feel like you got there and you are constantly being requested to give a hand on the many problems that an untamed and unsettled land has to offer. That is good, since having 4000 trying to save the world at the same time can get a little weird. Still, this lack of a higher mission makes you sometimes wonder: “what the hell am i doing here, now?”.

Models, scenario and shading are pretty good. I can say that Granado Espada has the best graphics among the free MMORPG´s, while Atlantica Online will be coming in second. And yes, this time i’m talking about game 3D models and textures. It is good to play a game that has few to answer concerning graphics to paid online games, like World of Warcraft, EVE Online and Warhammer Online. But there is something that i’m not going to forgive Hanbitsoft about: there is no character customization on Granado Espada. Yes, you read it right. The theory that “it’s a grinding game, appearance doesn’t matters” is taken to the extreme. The only thing that will change the appearance of the characters is the clothing that they are wearing. Roleplayers, don’t let the rich setting fool you at all, for the variety of costumes isn’t very high. Actually, they all look the same and only change every 12 levels or so. Since Granado Espada is three years old, character customization is something that Hanbitsoft is clearly not willing to add to the game.
A real shame, for God and the Devil are really inside the details.

Now, concerning the music. Beautiful, beautiful. Lyrical tunes are mixed with eletronic music, creating moments of high tension along succeeded by the melancholy of a Soprano’s voice along with full strings. Also, i should mention that there are songs signed by DJ Tiesto inside the game, to those who like his work. A funny detail is that some of the song’s names are written in a way that makes one notice that the authors didn’t have English as their first language. What can be more Korean than that?

Now, talking about Korea, here comes the grind. Yes, despite the eventual mission on which you have to protect an NPC against a horde of monsters, Granado Espada is pure grind. This is something that prevented many who really wanted to like the game to do it. Sure, there are missions, but when everyone is asking you to kill X monsters or bring you X items that drop from monsters, it doesn’t gets away from grinding. Gameplay-wise, you have all the features that modern MMOs have, like faction wars, territories to be conquered, crafting, hard-to-get items, shining swords and the like. PvP, so say the experienced players, can be most tactical due to the MMC, but you’ll only be getting into it after level 50 or so. Don’t worry, some days of gaming got me to 20 in no time. Another interesting feature is that you may, during the game, unlock characters that will join your family and work for you. They are and look the same to everybody else, so don’t feel surprised to find a twin brother of your partner on someone else’s group.
Other than the fiasco that the character customization is, the servers located in Singapore are pretty much lag free, the english translation is good and the client’s not bugged, save for an annoying eventual crash that freezes my PC here. But it could be my video board…damn termites! One can see that IAHgames is giving a lot of love to this youngling that GE is.

Oh, did i mention that the game has an auto-play system that, used during the right circumstances, will allow your characters to act as bots and attack enemies and even pick items automatically? Yes, you can go to sleep and leave them grinding, but i warn that it may be hard to do it on areas that will give you good experience points since some user-control can prevent the AI from picking more fights than it can handle and that if you auto-attack on a low level dungeon, you will spend the whole day there without getting a lot of experience. Still, Hanbitsoft had the sincerity of creating this system for a game that is so focused on grinding. I like that.
Now, i apologize for the short review but Ye Olde Orwin is very busy playing the game. Why? Because despite the grind, it is a good game and even better, it is free! If you have to play, play fresh! Or i would say, grind fresh!
Because, if one has to grind, it’s better to do it on something that you are not tired of, indeed! Now get out of here and start downloading the client! I see you on Sword of the New World: Granado Espada.

The Bad: No character customization – Lack of interaction with objects – Grind focused – Big client (over 4 GB)