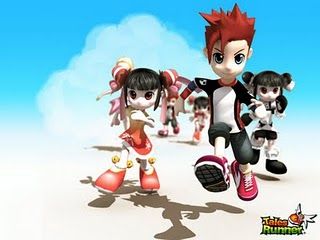 A new update for Tales Runner is coming December 23rd, 2009, Chapter 4: Return of Dr. Hell! This update is definitely not for the feeble minded! We’ve reviewed some sneak peeks of the update and it just left us in awe… Not only do you need great skills, timing, and precision, this update will take racing to a whole new level. While you’re racing, the floor may disappear and reappear in different locations, random objects will attack you, you must navigate through hard turns and twists, perform special tasks to unlock the next part of the map, and many more dangerous challenges along the way to the goal…

This Winter, an exile is coming back to Tales Land! The exiled map genius Dr. Hell is back with vengeance! However, he’s not alone… other new arrivals and items will make their way too including a special new character and a very white Winter Wonderland! Expect great things to be happening soon! Are you up for the challenge that is Tales Runner?

Tales Runner is an exciting fast paced social fantasy game that surprises everyone with each new update. Set in a rich, cute, and colorful fairy tale theme, Tales Runner provides users with a remarkable display of ingenuity towards the casual social gaming genre. Despite being a “racing” game, the social aspect of the game is fairly big. Players may choose and customize unique characters, decorate and grow their own customizable farm islands, host wonderful weddings, pose in special decorative photos, and socialize in a busy Town Park full of fun mini activities after a long day of racing.

Although the previous major update for Tales Runner was a general move away from “just racing”, they did implement a very innovative system called the Battle Channel. Following the storyline of their game, the Tales Land’s tournaments have finally started! The previous races were all in preparation for the anticipated Battle Tournaments. Battle other players to collect their Battle Points in an effort to receive the grand prize and title of Champion!