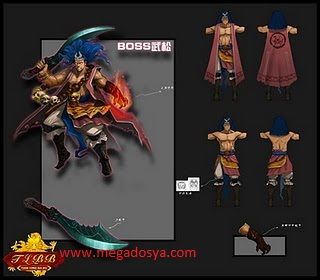 Hello everyone, my name is Ying Shi and I am from Beijing, China. I’ve been working for ChangYou as an illustrator now for over 2 years and hope to develop my career further within the company.

-How long have you been an illustrator for, and did you always want to be involved in MMO games?

I’ve been an illustrator for over 4 years and used to work in a mobile phone game design company before that. My interest in PC games development and the gaming industry made me want to express my value as an illustrator (as well as my design work) and so I joined ChangYou in order to expand this facet of my work.

-How did you go about designing the bosses/a boss of TLBB and what were the main influences and inspirations of your art work?

The works of an illustrator at ChangYou and projects such as TLBB include lead set designs, mount designs, pet designs and NPC monsters as well as other areas of artwork… boss designing is just one part of my job criteria. Due to the size of the entire project, one illustrator will work on a variety of different projects and not only focus on one area. I was working as an animation designer before my work became influenced by Japanese and Korean styles, however, since I got in touch with online PC games, I found I was more interested in designing European and American games. I found myself reading lots of design books and studying their art-work in detail and although my inspiration came largely from traditional Chinese culture, I realised that versatility as well as passion for art left a good impression on both me, and the people looking at it.

-Villains are usually seen as the most dramatic part of a story, would you say there was any pressure on you to design ‘cool’ bosses? Is this always a pressure as a designer?

When I receive a design brief, I always analyze the character and think about how to make it more impressive and interesting for the player. It’s not so much a ‘pressured scenario’ as opposed to a ‘challenging scenario’, but naturally you do still worry that others, including players, might not find them as interesting as me when designing them. There’s a fine line but of course this is always approved beforehand.

-How many concepts do you go through to get to the right one when developing the characters?

We can use our own ideas to create an image, but if we want the person or player to like what they see, then we need to take some time to think about what it is we want to design. Generally speaking, there are three types of bosses that appear in games, the cute-type, abominable-type and fantasy-type. These are factors to think about when designing and, at the same time, we need to consider the story of the boss’ life, where does he/she come from, what’s the background, the reason the boss is an enemy and how/why they became the way they are.

-Which is your favourite character and why?

It’s hard to say because as a designer, there’s always something I’m not 100% happy with. As a result of this, I haven’t sat down and actually thought that there is one particular design I would say is my favourite. I like them all but would love to spend more time on each of them too. My main aim when designing is to fill the criteria of the character and the game, not just what I like, but more importantly what the players would like.

TLBB provides a number of different boss characters and doesn’t stick to one type of genre i.e. a gangster video game or a cowboy western shot-em-up where you know what to expect a lot of the time. Did this open the doors to even greater creativity? Or did you have to follow certain guidelines? If so, what were the difficulties, as a designer, of sticking to the right format?

From the start of a brief, we need to consider a character’s story and according to the background and expectation of this, then we design the appropriate characters. I also have to consider whether or not the character can be smoothly implemented in the final model of the game. Sometimes, due to some limitations in the engine of a game, it’s difficult to get an absolute perfect result of what you want.

-TLBB is widely known for its authenticity to the book (Tian Long Ba Bu). What key ideas and features did you take from the book in order to create what we see today?

It’s important to bear in mind that the game has a genuine ancient Chinese martial arts feel to it and so highlighted areas such as the 9 nine different classes, the cities, the skills etc. are very influential. We’ve tried to maintain a genuine feel to the book also, hence why the NPC’s are named after characters in the original work of Louis Cha.

For more about the classes, please visit http://tlbb.eu.changyou.com/gameguide/Classes.shtml

-What do you enjoy most about your work as an MMO designer and what are the most challenging things about it?

I love design work generally. As a creative person, part of what I feel is a responsibility to discover new areas of design work and produce innovative characters, settings, pets and more. Not only is it something that satisfies me personally, but every design work becomes a treasure for ChangYou and the project – in this case TLBB.

-What are the common misconceptions that MMO game designers might have?

For creative people, or for me at least, the most fun part of it is the actual ‘designing’ itself. I have ideas all the time and so coming up with a list of these isn’t too difficult for me. I try not to think too much about something because then it becomes a chore. Instead, I focus on the brief and simply go with the flow of what I believe fits that category best. The engine resources are sometimes limited and so wanting the character to do certain things or have certain attributes can be tough, so instead we push it to its absolute limits to get the best out of the game.

-Bosses and villains are both loved and hated in films and games. Do you enjoy drawing the villains and do you see this as a fun part of being a designer?

It’s a challenge to design any part of a game, especially an MMO that has so many different features to consider. I love designing them regardless of whether or not they are an enemy and so the notion of a boss, although very cool, is the same for me as it would be for a hero (for example). It’s important for me as a designer to leave an everlasting memory for any aspect of the game, if I achieve this, then I achieve a goal for both myself and the game.

-What current project are you working on and will it involve designing bosses again? If so, can you give us a sneak preview of it?

At this moment I’m working on the TLBB project management team as well as some design work alongside that. With the company expanding its catalogue and creating future additions to MMOs, the work that our design teams are putting in has been immense. I’ve seen some of the designs myself and they look really cool but it’s hard for us to give anything away as they are not yet finalised and details of future releases are still in the planning stages. In the meantime, players can enjoy TLBB and look out on the www.ChangYou.com/en website for more news of upcoming projects.