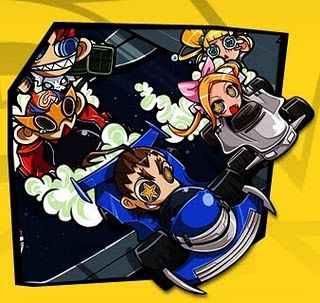 Transpee offers players a thrilling online racing game boasting innovative 3D tracks, unique cars and characters, and customization options to make each user’s experience different. The addictive multiplayer races are set on six elaborate adrenaline filled maps like the 3D Roller Coaster track featuring massive jumps and cars without breaks! Closed beta testers can get a feel for its easy-to-learn yet hard to master controls, single, team, speed and item racing modes, and endless car modifications. Players can choose among several characters including Denis, the leader of a bike gang, or Arumi, a female cop who chases after him, but soon realizes her passion for racing.

The characters might be cute, but the cars are dangerous offering players the ability to carve up another’s car and use a variety of stunt skills. The car’s surfaces are designed to produce optimum speed using the air-pressure of the cars ahead. Their reinforced durability and physical system enable drivers to use a driving strategy allowing massive crashes with the other drivers. The elements controlling each car’s distinct running characteristics include; weight, wheel size, steering angle, horsepower, tires friction, and engine characteristic curves. These new technologies also allow parts of the car’s bodies to be replaced with more aerodynamic pieces to improve the car’s ability to draft another.