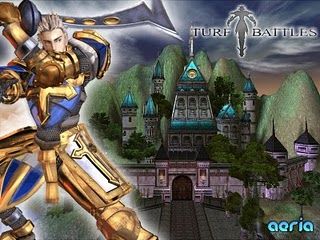 Aeria Games announced today that it has concluded its extensive Closed Beta period for Turf Battles and wiped the servers for the final time. In addition, Turf Battles has now begun a final “Beta Stress Test” phase that will lead directly into the official start of Open Beta.

Turf Battles is a massively multiplayer online role-playing game (MMORPG) well known for its fast-paced and competitive gameplay. The title was discontinued less than two years ago by its former publisher, to the great dismay of its loyal fan base. Aeria Games soon after licensed Turf Battles and has since been working closely with the game’s new developer, SmileGate, to restore the game to glory.

Both new and returning players will find that Turf Battles has something unique to offer them. New players can create dangerous brawlers or powerful mages, and explore an immense world full of forests, deserts, castles, and dungeons. Of all its features, however, Turf Battles is especially well regarded for its elaborate player vs. player (PvP) combat systems. Apart from simply engaging in one-on-one combat, players can form tribes and work together to conquer and defend land held by other player tribes.

As for veteran players, the end of Closed Beta brings a variety of bug and performance fixes, along with several major design changes requested by the player community. Chief among these features is a complete player kill (PK) point system that is deeply integrated into the game’s PvP system.

Players who participate in the Beta Stress Test will be able to retain their characters in Open Beta and after the game officially launches.