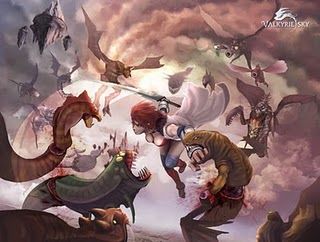 A game combining the all-time-favorite arcade genre, shoot’em up and MMO is a recent topic among gamers. The game is Valkyrie Sky whose open beta service was released last December 28th at global game portal GameKiss.

In the early days users could initially move characters—usually an aircraft- only left and right, and later to four directions. However the users’ freedom was still limited as they could only choose one character from a set. Valkyrie Sky, therefore, is a revolutionary shoot’em up MMO in which users can develop their own characters and change character’s abilities when they face high-level stages.

Not only does Valkyrie Sky develop fun elements that require immediate reaction and high control ability, it also adds RPG elements for 2010. For example, instead of monotonous hunting on the field like in ordinary RPG games, Valkyrie Sky has excitingly tense shooting game stages. In order to avoid turning into a repeatable arcade game, the game includes an RPG’s character growth, fishing, cooking, and playing instruments. It furthermore adds a life system and community elements with a high degree of freedom. The mix of two different genres could have been bizarre, but resulted in a perfect combination in Valkyrie Sky. Even the Norse North Mythology naturally integrates into the shooting and RPG genres.

Because of the combination of two opposing genres’, gamers have been half curious, half worried. But the results of the OBT exceed the expectations. The number of users logging in simultaneously is increasing everyday as new gamers join not only from the U.S. and Canada but also from European countries including Poland, Germany and France.

Valkyrie Sky will be a great choice for 2010 not only for fans of shoot’em up genres but also gamers who were looking for a new game to replace existing lackluster RPGs. Registration, download and playing of Valkyrie Sky are provided worldwide, and can be enjoyed free of charge. More details of Valkyrie Sky can be found at the official website: http://valkyriesky.gamekiss.com/

Are you going to try the open beta of Valkyrie Sky? Let us know your thoughts on the game! Send your comment!