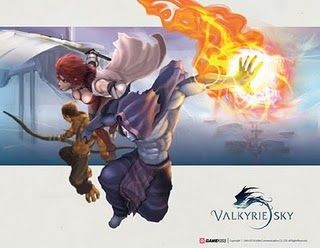 Online PC Game Portal GameKiss announced the official launch of Valkyrie Sky at 00:00 (PST) on December 28th. Valkyrie Sky, based on the Norse mythology, is a vertical-scroll shoot’em-up game combining community elements of an MMORPG and the instant action of a shooting game.

The biggest change in this newly launched version is its improved graphics and the camera angle control. Furthermore the users’ line of sight is widened and character skills have become even more dazzling. The character visuals are a key enhancement and the rotating 3D camera is possible thanks to the graphic engine renewal work.

The PvP system, which previously received the most criticism, was also significantly upgraded. Users have pointed out unwanted match-ups when the PvP automatically started as soon as the PvP mode was chosen. The current improved system changed to the duel mode system which is expected to provide users more fun.

Classes became more diverse thanks to the addition of the post-changing system. When users reach Level 15, they can switch their post after having mastered the skills of their current class and finished the quests. Nearly 20 improved and new game systems were added – for instance the dungeon system was newly added and the life system got upgraded.

“In the last three weeks of the closed beta service between October 28 and November 10th, we checked every single comment and survey response. We tried to reflect them on the open beta test as much as possible,” said RomaN, GM of Valkyrie Sky, “After the CBT, the developer’s note was posted everyday, and we received plenty of great and helpful feedback which was applied to the game with excitement.

“Many users have waited for the official launch date. We are very pleased to announce good news to our users before the end of 2009. To celebrate the launch, we are planning various in-game events. We look forward to many users participating”, RomaN added.