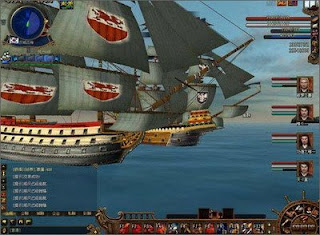 Voyage Century Online is a free nautical MMORPG developed by Snail Games and published by IGG, the distributors of Myth War Online. There is also a European distribution of the game that goes under the name of Bounty Bay Online which is published by Frogster. It is set in 17th century Earth and features accurate historical representations of several coastal cities. Players are not required to choose a career path at the beginning of the game. This gives players a rather varied gameplay in which you can either specialize in one skill and trade for resources, or make use of all the skills. (i.e. You are strictly a tailor and want to make clothing. You can pay someone who can fight to gather wool for you, or you can learn to fight and gather it yourself. etc.) Combat occurs both on land and on the sea, where players risk the threat of pirates when venturing further from the more populated areas. The game profits off of optional cash shop items that are available for players to purchase with real money. Unlike many other MMORPGs where players can only succeed through battle, Voyage Century Online gives players the option of embarking on several unique professions.
Official Site: http://vc.igg.com/
Paylas