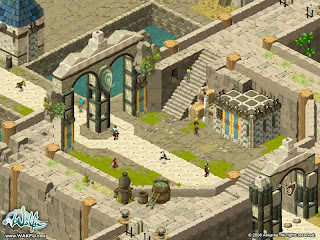 Wakfu is an MMORPG (massively multiplayer online game) in which players dive into epic adventures with thousands of other gamers from around the world. Armed with weapons and magic, they must carve a path through a cruel, living world either through battle or through politics in a quest to gain control of the islands of Wakfu.
Status: Open Beta
Official site: http://www.wakfu.com/

Nothing remains of the old Dofusian township but the name… In this week’s feature, you’ll be swept into the legend that is Astrub – the stories, the neighborhoods, and the winding alleys.

What is Wakfu enchantment? Based on runes and magical charging, it’s the ultimate form of equipment-boosting!

Dynamic challenges keep players constantly busy and give a specific ambiance to the World of Wakfu. Let’s have a closer look on this new type of quests!

Discover Rushu’s dungeon and all you need to know about Rushu’s Shushus in the latest feature!

Dive headlong into the world of Wakfu and discover the cross-media possibi- lities with the MMO, the Mangas, the tv series and plenty of other media!

How do you evolve your stats and your character to really find your niche in the world of Wakfu?

Just because you can’t see it, doesn’t mean it’s not there. Artificial intelligence brings the creatures of Wakfu to life, making them unpredictable and liable to attack at any moment. Your life just got a lot harder!

So as to make spells more interesting in Wakfu, each one is linked to a specific condition and zone. This is especially important in the game’s turn-based combat system.

The approach to character spells in Wakfu is a breath of fresh air in the world of MMOs. Come and discover our original progression pathway.

So as to give you an idea of how Level 2 professions work in Wakfu, we’re going to explain to you how to craft a Linlinen Bag.

Wakfu’s ecosystem is one of many original concepts in the game. All creatures in the world fall into organised, hierarchic families. Get ready… you’re about to come face to face with a truly “living” environment!

Professions that interact with nature are among the most important skills in Wakfu. The fundamental elements in these professions are planting and harvesting. Your green fingers can help create the forests of tomorrow.

Unlike other MMOGs, Wakfu features a turn based combat system not only for player vs player confrontation (PvP), but also in player vs monster situations (PvM). This is one of the outstanding features of this game.

Wakfu is a massively multiplayer online game (MMOG) which takes place in the fantasy universe created by Ankama Games. In the same spirit that animates its big brother, DOFUS, Wakfu will transport you to a magical universe full of sparkling humor. Whether you become a time-controlling Xelor, a brave Iop, a healing Eniripsa or a sneaky Sram, you’ll discover a heap of new character classes, a unique tactical combat system and strange, colorful landscapes. Wakfu’s turn-based Tactical Combat System, will bring a new dimension to your sense of strategy, combining turn-based tactics and dynamic action in each battle.

Featuring an Isometric 3D Universe with Multidirectional Scrolling, Wakfu will bring you to the heart of a fantastic adventure with highly customizable characters evolving in a world with an autonomous ecosystem with which you can interact. Having no NPCs, the game will revolve around players and their actions, and give them entire freedom and control over their world. Wakfu is intended for adventurers of all levels. It’s up to you to find your own strategy and to succeed in the challenges you face along the way. Who knows, maybe you’ll be one of Wakfu’s greatest heroes.