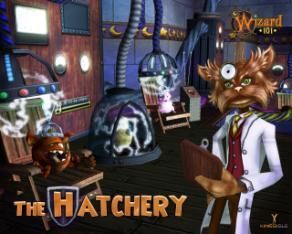 KingsIsle Entertainment, creators of the massively multiplayer online game (MMO) Wizard101 is proud to announce details on two of the major content updates for 2010. An extensive Advanced Pet system is launching this spring and the world of Celestia is launching late summer. In addition to all new quests the Celestia expansion will also include an increased level cap and new secondary schools of magic.

Coming this spring, players will have the opportunity to hatch customized pets from millions of potential combinations. The Advanced Pet system will bring a new dimension of interaction within Wizard101 as players can race their pets in the expansive Pet Derby, participate in new pet-themed minigames, feed and train them, and use them as allies in magic duels. Players will be able to level their pets from an egg to ancient beings with incredible powers.

The new world of Celestia is inspired by Atlantis, and young Wizards will encounter new adventures and quests deep under the sea. Celestia also increases the level cap in Wizard101 from level 50 up to level 60, as well as introducing three new secondary schools of magic. Celestia will officially open in late summer. Starting in June players can undertake new quests to discover the secrets of this new world and begin to unlock the story behind Celestia.

“2010 is shaping up to be an incredible year for the students of Ravenwood School of Magic,” said J. Todd Coleman, Vice President and Creative Director for KingsIsle Entertainment. “Whether exploring the underwater kingdom of Celestia, or hatching and training pets to participate in the Pet Derby, every player–from the newest apprentice to the returning grandmaster–will find something compelling, engaging and fun.”

In Wizard101, kids and families enter the magical world of Wizard City as student Wizards setting out to hone their Wizard skills, cast spells and summon powerful creatures to fight evil forces. The characters and worlds of Wizard101 are influenced by literature, history and pop culture, giving the game a depth and quality appreciated by families and players of all ages.

Wizard101 can be downloaded at www.Wizard101.com and offers free game play for as long as players choose. Players seeking access to premium areas and items may purchase pre-paid cards in participating stores or purchase a subscription or Crowns online.