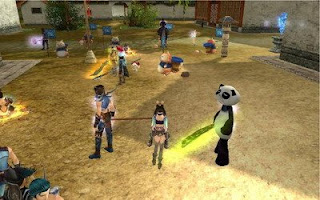 World of Kung Fu is a Massive Multiplayer Online Role Playing Game (MMORPG). The World of Kung Fu is an immersive 3D online world based on traditional Chinese martial arts and mythology. There is no disc to buy, no subscription fee, and is completely free to play. The game-art is drawn by famous Japanese designer Senri Kita, best known for her artwork in Samurai Showdown, as well as in other titles from SNK and Capcom. The game is already successful in China with over 6 million players in over 20 cities.
Official Site: http://www.worldofkungfu.com/

The World of Kung Fu is a 3D MMORPG for the PC. Based on traditional Chinese culture, the game takes place in a mythical land founded on the ancient Kung Fu moral values of justice and heroism.

Breaking away from the limits imposed by ‘professions’, each player starts the game as a martial artist of old, studying Kung Fu in a remote village. Having perfected certain chosen skills by completing extensive training and undergoing numerous tests, players set out to take part in the creation of the Wulin, a classic Kung Fu society. As they travel throughout the various territories of ancient China (Zhong Guo; literally “Middle Kingdom”) players will be able to demonstrate their valor and bravery as they strive to become martial arts legends.

Rooted in traditional Chinese society and mythology, the game is designed to provide an authentic cultural experience in which the player will be exposed to the depths of China’s ancient philosophy and rich customs while enjoying amazing adventures in a fantasy game world setting. The 3D graphics are inspired by the beautiful landscapes of uncontaminated countryside portrayed in traditional Chinese paintings.

As in the real world, the World of Kung Fu is a complex network of various interconnecting systems. Unlike other games in which the point of the experience is to defeat monsters and enemies, this game invites the martial artists to become deeply involved in the development and establishment of a society with interdependent economic and social systems. The game also enables players to experience the emotions of a private life filled with romance and drama. Furthermore, as they increase their skills, players can master their own style of Kung Fu and establish their own schools, from which they will be able to pass their knowledge on to others.

Another unique aspect of the game is how World of Kung Fu is made to be as interactive as possible. The GMs are actually in the game for you to interact with, and our event staff is continually creating new interactive NPCs and adventures that help give the game a live feel.

It is our goal to bring the Middle Kingdom of the World of Kung Fu to life! Many more adventures and additions to the game are planned for the future. All new content upgrades will remain free to download and free to play.